The Canadian Eskimo Dog is a powerfully built, moderately sized dog with a thick neck and chest and medium length legs. Typical of the spitz family of dogs he has a wedge-shaped head held high with thick erect ears. The eyes are obliquely set giving a serious appearance. The dog has a bushy tail carried up or curled over the back. Of almost equal height at the hips as at the withers, medium to large boned and well muscled the dog displays a majestic and powerful physique giving the impression that he is not built for speed but rather for hard work. During the winter the body is thickly clothed with an outer coat of straight or erect hair; below is dense underfur which enables the animal to easily withstand the rigours of high latitudes. A mane-like growth of longer hair over the neck and shoulder will appear on male specimens.
The whole conformation of the Canadian Eskimo Dog should be one of strength, power and endurance balanced with agility, alertness and boldness. The female of the breed will usually have a shorter coat than the male and will always be significantly smaller than the male. As young bitches, they will be finer boned giving among other things a narrower head which tends to produce a friendlier looking face than with males. Both males and females of the breed are known to have a rapid growth rate reaching working size around seven months. However, the maturing process extends to at least three years of age giving them a very majestic appearance. Puppies have often been described as miniature adults, with erect ears and a curly tail at the young ages between three to five weeks. There may be occasional periods during adolescent growth stages when the ears may not be fully erect but it is important to note that the ears of the Canadian Eskimo Dog do not have the same gradual growth of becoming erect around four months of age as is seen in some other breeds.

The temperament of the Canadian Eskimo Dog should reflect the tough, hard-working breed that he is. He is not to be viewed as a domestic pet but rather as a primitive dog originally domesticated by Inuit for specific tasks in a harsh arctic environment. In general disposition, the mature Canadian Eskimo Dog is gentle and affectionate with the average individual, enjoying attention. Even with total strangers the dogs are rarely standoffish. Usually they will exhibit a rather quiet friendliness and harmless curiosity or become completely distant. The dog is very pack oriented and if raised as a group, dominant and subordinate roles will be acted out under the leadership of a totally dominant or boss dog. Behaviour within a group or pack is usually well structured and controlled but it is not uncommon to see battle scars or torn ears on dogs originating from kennel areas where the dogs are raised in groups or packs. Compared to modern domestic breeds, the Canadian Eskimo Dog has an almost over response to any stimulus whether it be food, work, fighting or play. For this reason, the dog should be a companion for adults and is not to be considered a child’s pet.

Subject to an annual moult usually in August or September, the coat is thick and dense with guard hairs being hard and stiff. This outer coat will vary from 3-6 inches (7-15 cm) in length. In males it will occur in a mane- like growth over the shoulder and neck making the male appear much larger in size and taller at the withers than he actually is. The undercoat is very dense to give excellent protection during the most extreme winter conditions. During the moult this underfur will come loose in clumps over a period of a few days. Females will usually have a shorter coat over- all partially because of the additional moult that will occur following the birth of pups. No one colour or colour pattern should dominate the breed with the colour and colour patterns of the Canadian Eskimo Dog ranging from:

Very common to dogs with solid colour to most of the head is a mask- like shading of white around the eyes and/or muzzle with or without white spots over the eyes. On very rare occasions the spots over the eyes as well as cheek-marks will be buff coloured thus adding a third colour to a normally two-coloured animal. Pigmentation of the nose will vary from black to light brown (especially on lighter coloured dogs with red, buff, or cinnamon on the body). Butterfly noses have, on occasion, appeared with the light brown nose.

Overall the skull would be described as massive but well proportioned being broad and wedge-shaped. Although often described as wolf-like in appearance the head of the Canadian Eskimo Dog has a more elevated forehead. Immature females will have a much narrower skull than the male. The muzzle is tapered and of medium length. The mouth: the jaws are heavy and powerful possessing large teeth with well-developed canine teeth. The incisors meet in a scissor bite. The teeth are perfectly adapted for the dog’s instinctive approach to ripping and tearing his meat or fish. Lips are black or brown with pink. The eyes are generally dark-coloured but hazel or yellow-coloured eyes will appear in the breed. They are small, wide spaced and placed obliquely in the head which tends to impart much more of a wild and deceitful appearance than the dog deserves. The ears are short, thick and have slightly rounded ends. They are carried erect, turned forwards and are covered with dense short hair. Width of the forehead between the ears on the males will be from 5-6 inches (13-15 cm). On the females the distance will be from 4-1/2 – 5-1/2 inches (11-14 cm).
The natural voice is a howl, not a bark. When in a group the dogs often give voice in a chorus of strangely woven tones and this is one of the thrilling sounds of the Arctic. A number of dogs will produce a mass crescendo persisting for varying periods until as if cued by a special note all will abruptly stop. 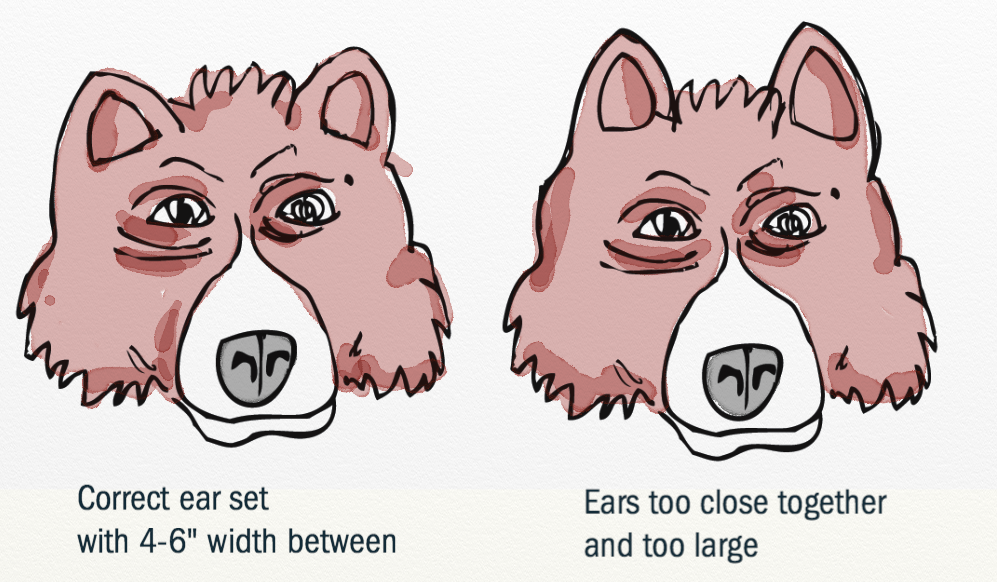 The neck is short, straight, thick, and very muscular.

The dog has broad shoulders obliquely set with moderate muscling. The forelegs are straight but may give the appearance of being bowed because of the well developed triceps muscle above and behind the elbow and the pronounced muscle on the forearm itself. Feet are large, nearly round, well arched with thick pads being well furred between; however, under extremely cold winter conditions, this fur will grow to be very long so as to cover the bottom of the pads.

The body should further accentuate the over-all power and endurance of the dog through a deep, wide and well muscled chest to a well-developed loin There is very little curve to the flank. Interestingly, the spinal column when felt through the furred body is well pronounced. Above all the body should be muscled and not fat. The skin of the dog should feel thick and tough. Females will have a smaller and less muscled body than the males. 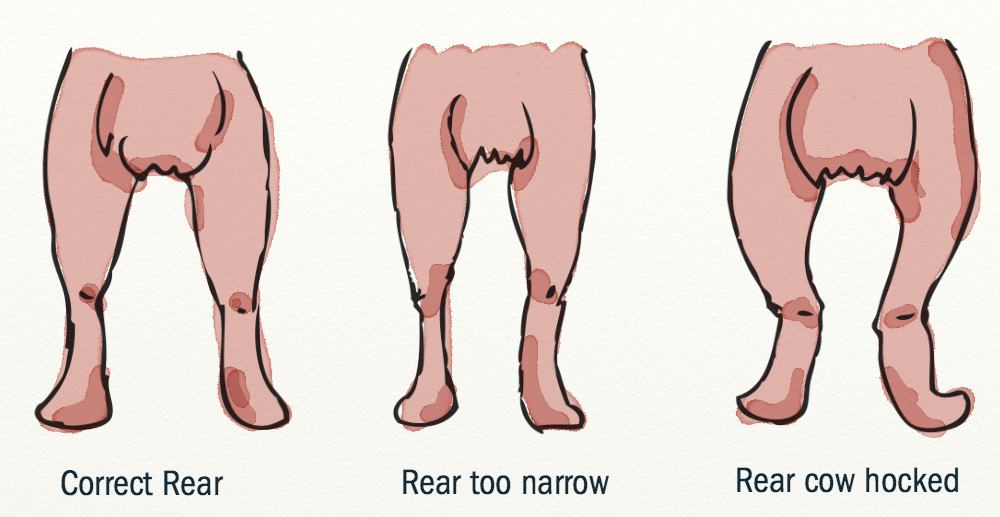 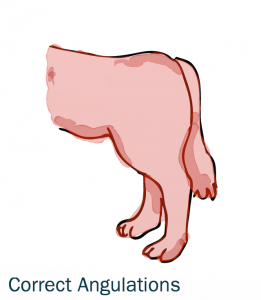 The hips may appear as pronounced and bony as the spine, and are about the same height as the withers. The legs will be very muscular with the width of the thigh being carried well down towards the hock. The stifles are well bent. The hind feet are similar in design to the front but slightly longer. From the rear the legs will appear straight with the hocks turning neither in nor out. 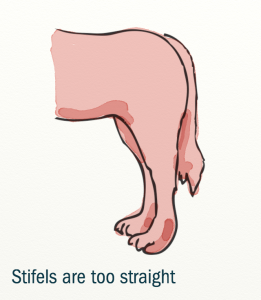 The tail is large and bushy and generally carried up or curled over the back. Mature bitches may on occasion carry their tails down. 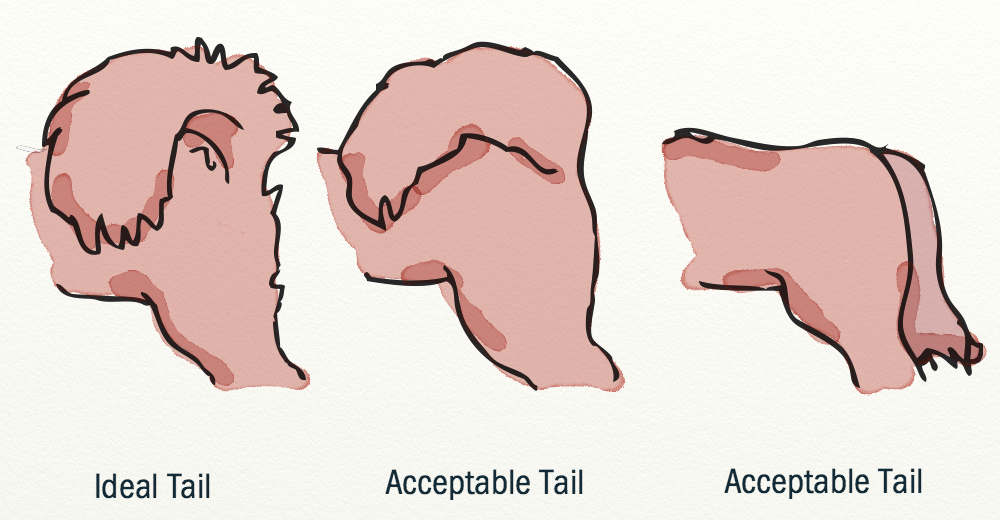 The working gait of this dog is a powerful and brisk trot with the rear legs moving in line with the front legs in the force motion but showing some abduction during the forward movement of the stride. This may be especially pronounced in mature male dogs with many miles in harness. This gait may appear awkward to the untrained eye but is a result of a wide stance caused by well-developed thighs. This particular gait is a well-balanced efficient stride for heavy pulling day after day. The movement of the dog should in no way appear as a choppy or paddling motion. The females are much faster and freer in movement than the heavier males and are capable of breaking stride from the natural trot and running or galloping for much longer distances than the males.

Blue eyes, dewclaws on rear legs; floppy ears, the exception being battle torn ears; clipping or altering the coat by scissoring; no evidence at all of a curled or upright tail in male dogs (recognizing that a tail may occasionally be kept down as a sign of subordination or stress); excessive undershot or overshot jaw.