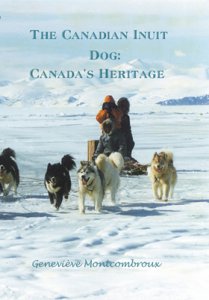 The second edition of this book by Geneviève Montcombroux is the sole book devoted to a unique Arctic breed, the Inuit sled dog, its place in the traditional life of the Northern people, its future, and its role in Polar exploration. The book comprises detailed descriptions of its physique, temperament as well as a nutrition guide. Also documented is how this beautiful dog, indigenous to Canada, has survived for thousands of years in the harshest of climates, and yet was very nearly extinct a mere thirty years ago.

You can also buy it from Amazon.